It is a grim reality that security teams have to face the dilemma of choosing the right alert to deal with, usually from some random threat classifications shown by siloed tools. They cannot assess every alert to identify a severe attack. With the regularity and diversity of attacks gaining speed, security teams are only getting more overwhelmed with alerts. As a result, many alerts are ignored, and most incidents go uninvestigated, making the organization highly vulnerable to attacks.

This challenge can be addressed by strengthening incident response capabilities through Security Orchestration, Automation, and Response (SOAR). Security analysts can use the SOAR platform to monitor data from various tools such as SIEM and threat intelligence platforms. SOAR minimizes manual intervention by collecting security data, prioritizing threats, and automating threat responses.

SOAR is a scalable, analyst friendly, unified security platform that offers intelligence reports by automating data collection into a centralized location. Analysts can review this data, decide if the incident is suspicious, and initiate a playbook to respond to incidents.

A playbook is a set of remedial actions that can automate and orchestrate threat responses. It can be widely used to deal with recurring alerts and incidents. Made to run, either manually or automatically, playbooks can respond to specific alerts and incidents set by analytics or automation rules. Playbooks are predestined automated actions and can be altered to execute complex response actions.

Here are a few common scenarios where playbooks are used. 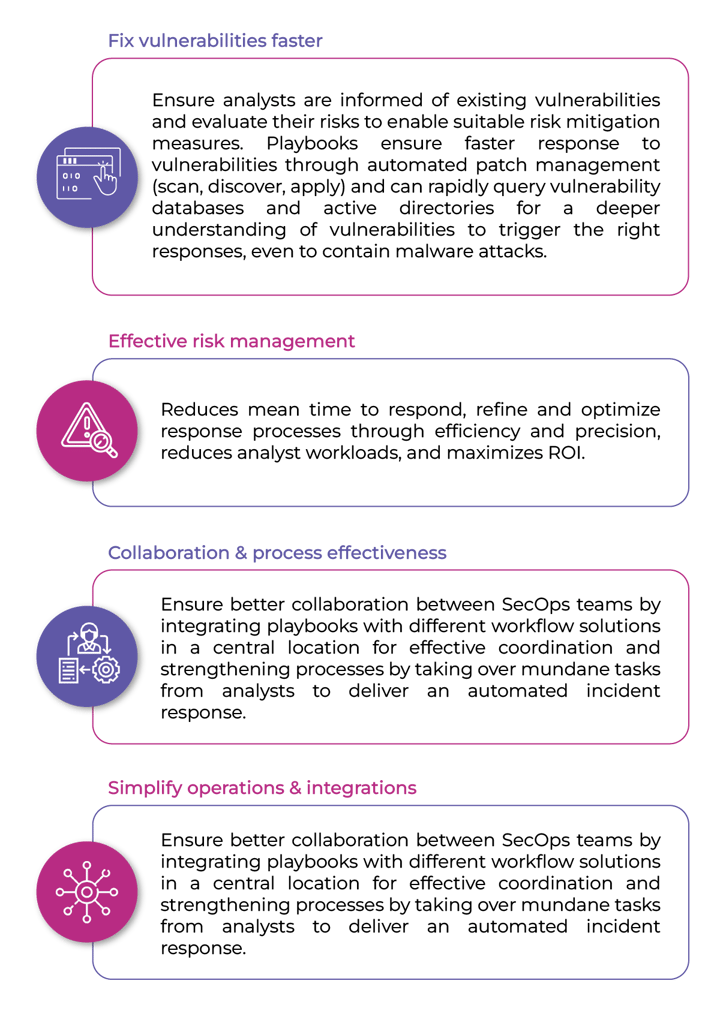 Incident response is an immediate, fast activity that requires strong, consistent processes. Playbooks are the way to maximize the robustness of incident response as it refines the knowledge and experience of security analysts into a reliable and repeatable process that can handle the incident in the right manner to ensure proper remediation.

Playbooks are an ideal way to improve the security team’s ability to respond to cyber incidents. It can drive collaboration amongst teams for faster incident remediation. It clarifies by critically classifying the threat with specific incident scenarios and gives you the right direction to know the impact of the breach. A skilled and experienced team is necessary to develop, own, execute and manage a good playbook. You also need a deeper understanding of your networks, evolving threat landscape, and detection and response techniques to create playbooks that are adaptable and aligned to the risk levels of the organization.

To know more about SOAR and its incident response capabilities, talk to our security experts at contact@aujas.com.

Copyrights © 2023 All Rights Reserved by Aujas.